This was quite an interesting country: the 7th in our world travel, but also the last continent to finish off our 3 months journey. Lima was indeed our gateway to explore South America.

One of the largest South American cities with its 8.5 mln people, Lima is divided through different neighborhoods: the most touristic Miraflores and the Downtown Lima are the most famous ones. 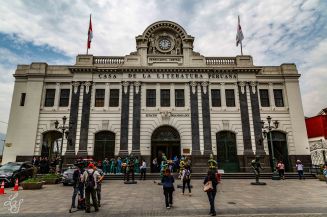 I admit we didn’t explore that much in Lima: indeed, we departed just after 2 days with Peru’ Hop, a safe and really reliable bus travelling around Peru’, with final destination Bolivia, La Paz.

Pro tip – why did we choose a bus? Altitude sickness: remember, the most spectacular part of Peru’ is up in the sky, between 3000 and 5200 metres asl. Lima is lying exactly on the sea, hence consider to move by bus/car to Cusco/Lake Titicaca/Rainbow mountain if you want to get acclimatize and don’t suffer from this disease. There are pills and coca leaves to chew/have infusion, but that’s only for mild altitude sickness. When it hits you, it generally hits hard, so better take it slowly and not fly directly to Cusco. 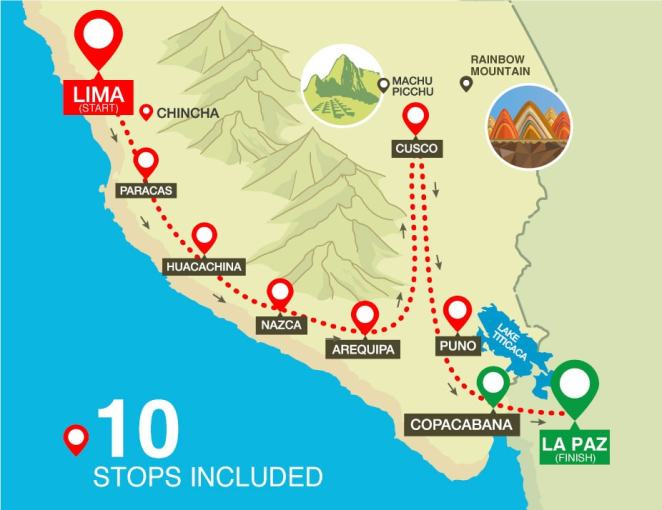 This was our original itinerary, and it didn’t change that much apart from La Paz, which we’ve never reached due to political unrest.

Let me go through all the stops we made together with some pics and some quick tips.

Paracas is home to the Ballestas Islands, also called the Poor man Galapagos because they are home of penguins, albatross and other sea-animals. We decided to not go there, but undertake a free tour at the red beach and desert nearby. The city itself is really  small and touristic, hence I wouldn’t recommend to spend a night if possible, but move on directly to Huacachina. 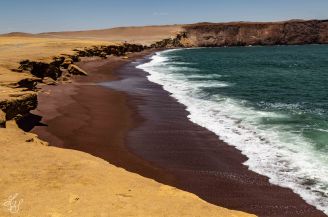 Huacachina is a desert oasis and tiny village just west of the city of Ica and it is the fun area for clubbing/chilling in the sun. At its center are the green waters of the Huacachina Lagoon, ringed by palm trees and thought to have therapeutic properties (I wouldn’t go in though). The lagoon’s shores are dotted with bars and clubs. Definitely recommended to stay here 2 nights if you want to relax, sip a (cheap) cocktail by the pool and get some suntan in the dunes.

By the way, there are these dune buggies that gets you around in the desert and let you sandboard for around 10-15$ each! 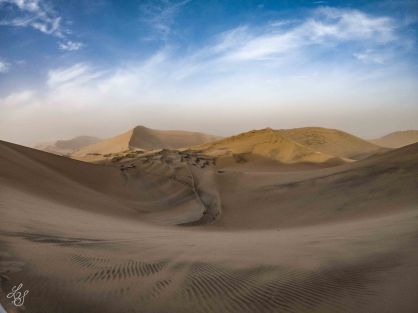 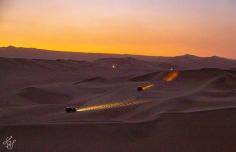 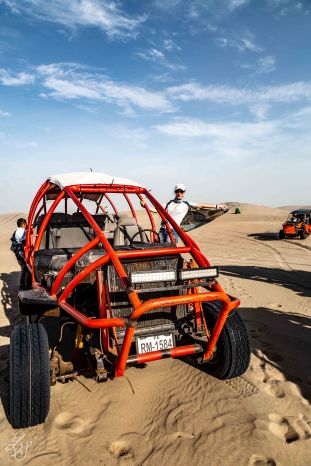 Nazca is a small city with a touristic central area mostly famous for the Nazca lines. You have two options for Nazca: either you fly above the lines with (reliable) local operators or you pay 2 soles to get on top of the viewing tower and get access to 2/3 of the nazca lines: the tree, the hands and partially another one that was cut by the highway.

There are about 300 different figures, including animals and plants. Composed of over 10,000 lines, they are nothing more than 10-15 cm deep. They were made by removing the top layer of reddish-brown iron oxide-coated pebbles to reveal a yellow-grey subsoil.

Unless you are flying around, it may not be worth to spend a night here.

With an historical center that has been declared UNESCO World Heritage site, the second most populous city of Peru’ is a mixture of Colonial buildings with beautifully carved monuments. Tip, we stayed at this Hostal San Agustin, very basic but a footstep away from the city-center and with that amazing historical view in the pic below. Two or three nights in this city should do – consider that you will leave at 3:30 am if you undertake any excursion around, so you may want to sleep when you come back! 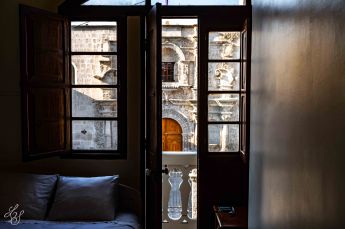 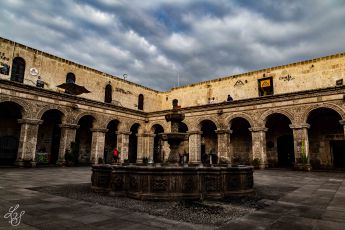 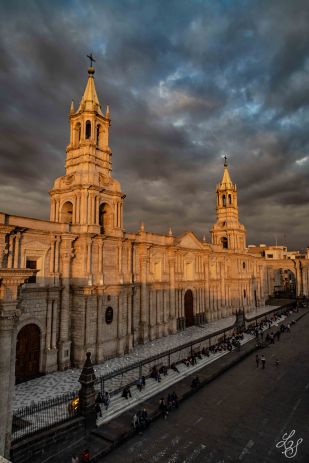 Arequipa is also known to be the base for excursions toward the Colca Canyon, second world deepest canyon and the Misti Volcano. Being at 2500 mt asl, we decided to get a bit more acquainted with altitude and we did the Colca Canyon day trip – ranging from the depths of the Colca canyon..

..to the flight of the Andean Condor at Cruz del Condor; 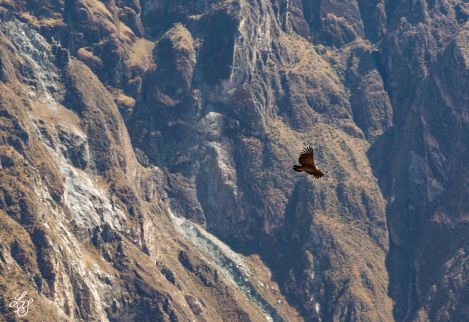 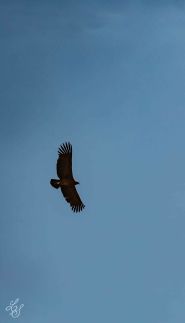 Intermediate stops were in a natural thermal (really hot) bath and

the amazing view at 4920 metres over the biggest Volcanos around Arequipa.

Nearly 2 million people visit this city every year: it was the historic capital of the Inca Empire from the 13th until the 16th-century, and now it is a world heritage site and departing point of several of the most famous South American’s escapes: Machu Pichu and Rainbow mountain.
As mentioned also before, Cusco is the first Andean acclimatization stop people choose to do, willing or not: because it is a 3500 metres, before doing anything, it is really recommended to spend 1 or 2 night just chilling and easily walking throughout the city. Trust us, it was way more difficult that it seemed and we arrived by bus! We had heavy breath after every step on a staircase. 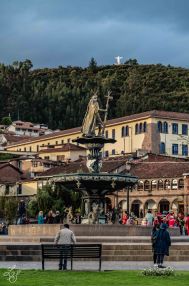 Oh and look at this: Conquistadores stones (left) vs Inca stones (right) 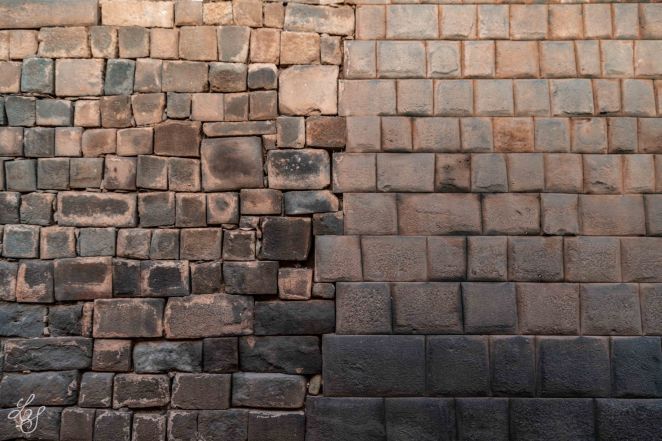 Cusco alone it is worth at least 5 nights, including a round trip to Machu Picchu and to the Rainbow Mountain.

In order to get to the ancient city of Machu Picchu, you will have to arrive at Aguas Calientes, this very strange all-touristic town at the base of the Inca city (day vs night below).

You can arrive there by foot, by bus or by train. In any case, it will be either tiring or expensive: be prepared for 2x,3x prices compared to the rest of Peru’.

Maybe one night here is worth because in this way you can climb up to Machu Picchu early the day after (and come back on that day as well), avoiding the big crews. Grab the 6.00am ticket and make sure to be up around 6:40am max.

Pro tip: if you want the 6am ticket, in non-touristic months you can book easily up to 2 weeks before, but if you want to hike up one of the 2 mountains behind (Huayna Picchu or Machu Picchu Mountain) you’ll need to book almost 6 month in advance.

An early wake up is definitely worth it if you are one of the first up in the old Inca city. 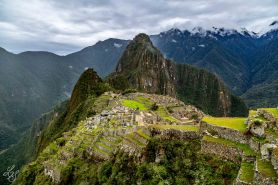 Best way is to go up with the bus (12$ each) and come down by walking via the Inca stairs!

Another very big social hit is the Rainbow mountain. The mineralogical composition of this incredible mountain became visible around 2014-2015, most probably because of climate change, revealing this incredibly colored peak. Situated at 5000/5100 metres asl, it is not as easy as it seems to trek, because of the altitude. You need to be acclimatized otherwise here you will suffer, risking quite a bit. Indeed, generally guides bring oxygen with them.

We took the steep one. If you are quite acclimatized and you take it slowly, you’ll do it without any major problem. 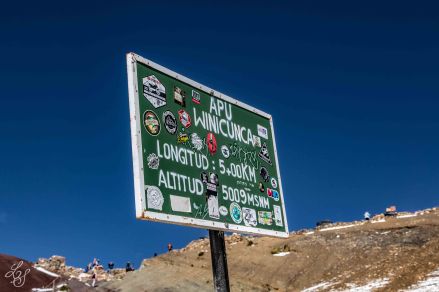 And by the way, remember there are people living up there to help us, tourists. Those people are incredible, for their strength and resilience.

Puno is almost at the southern edge of Peru’ and it is located on the shores of Lake Titicaca, at 3830 ms asl. The lake is also known as the world’s highest navigable lake. There are some people who built their lives on the lake and those are the Uros people: living everyday on 120+ self-fashioned floating islands made of dried Totora reeds. 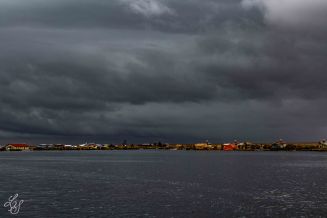 After Puno there is just the border crossing for Copacabana, Bolivia, but this is another story for this blogpost -> Crossing the Bolivian border: 30 hours in Copacabana

Using a Drone in Peru’?

Being a drone owner, I’ve found myself in a lot of troubles preparing for the Peru’ arrival. Indeed, this is a particular matter, where you will need to pay a tax (deposit) if you import such a good to Peru’. Money should get back to you when you leave through an airport but true story is that you should always declare it (Nov/2019). If it’s little, like a Mavic Mini, Spark or even Air, most probably nobody will care and you will pass through it – just declare it and they will tell you it’s fine at the custom office upon arrival. If it’s bigger, you may need to pay like 20% of it’s value as an import tax deposit.

Note that this is valid only if you arrive through an airport though. Via terrestrial border they will hardly check your drone and/or ask for a deposit, because most probably you will never see it again.

Said that, the other important tip is: when you fly in high altitude consider that your drone will use more battery than usual to sustain the flight and that high winds can carry your UAV quickly away because of thin air – hence fly carefully! 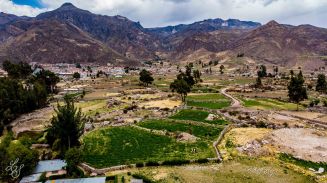 Hope you enjoyed, we certainly did! 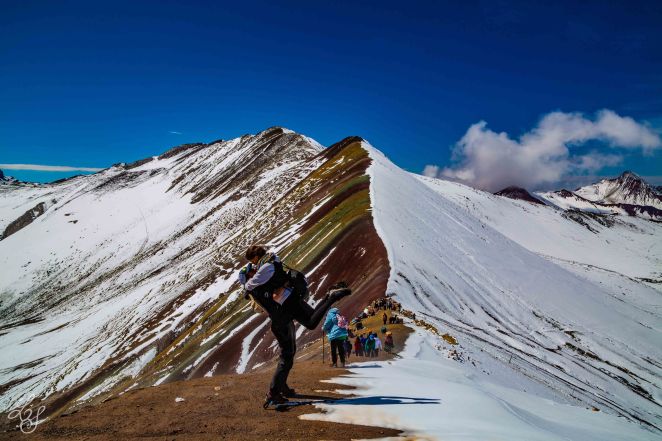 PS: that was quite an effort 😀

The only #corona we admit in our lives
This guy @eganbernal, just won @giroditalia - incredible performance, chapeau!
@earthhourofficial 2021 - turn off your lights and enjoy a full Moon outside.
A two sided story for this February.
Blue sky, empty slopes, #ffp2 masks and homemade lunch. That's skiing in Austria during covid times.
#Linz winter walking!
#winterwonderland behind #home.
A missing story from 2020 with a needed picture - when I fulfilled a #bucketlist 's dream: driving a #Ferrari. What's up for 2021?
[LINK IN BIO and SOUND ON!] Ready for ending this 2020? Zeitgeist, year in a review is out! Full video with the link in bio. Despite being a tough year for everybody, taking what was left was still possible. Indeed, it was the year of...