The smallest capital of Europe: Bratislava

Bratislava is the smallest capital of Europe. Said this, wandering in its streets still feels like moving around tons of different cultures and you shouldn’t miss these little spots.

Stop and have some rest in one of the hundreds bar, Cafè, pubs which populates this city. Have a drink or three: remember, 1lt of beer is almost as cheap as 1lt of fuel here. Ah, and there is also a Cat Cafè, where you can have a tea while cuddling some of the cats.

While walking around, try not to miss the human-sized statues which are positioned around the whole Old Town. The guy above is the Čumil – “the watcher”. There are two possible explanations for its name. The first rumor says that he is a typical communist era worker who is not bothered about the work he’s supposed to be doing. According to the second rumor, he’s looking under the women’s skirts. 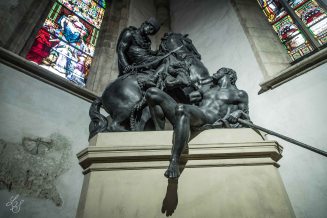 Nonetheless, this city is also famous for its castle, overlooking the Old Town. And the churches: the Cathedral, in the name of St. Martin, contains a very interesting art piece.

Last but not least, do not miss the Little Blue Church.

Cheers from the Runtastic UA team!